We had been dating for four years and we were in our last year of College, scheduled to graduate in the Spring of 2003. Although Juan often expressed interest in getting married while we were in College, I often turned down the idea. I didn’t want to be married until we graduated. I had big dreams and I desperately wanted to stay focused on them. Despite my hopes of getting a doctorate degree and my desire for a house to call my own, Juan knew I wanted a long engagement. Time was ticking so he began planning his proposal and working two jobs to pay for my engagement ring.

In hindsight, I should’ve guessed he was going to ask me to marry him about this time. We’d already been together longer than most couples, and graduation was only a few months away. Yet I was clueless. We were struggling in our relationship so much I honestly wasn’t sure if we’d survive another year. No wonder he was so nervous about popping the question. Nevertheless we loved each other and continued to press through despite disappointments and painful events.

It all began when we were out shopping for gifts for each other and our family members. Amongst other gifts, we had just picked out a rose scented lotion set for his mom and we chose a foot spa/massager for me – which I couldn’t wait to try  out. 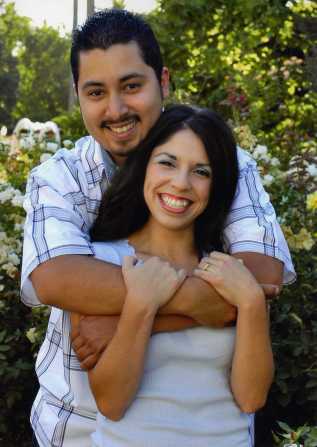 On Christmas Eve, to my amazement, the gift I received from Juan wasn’t the foot spa/massager I picked out, rather it was the gift we chose for his mom. I was pretty upset! I couldn’t understand why he would give me his mom’s gift. He already knew how much I looked forward to using the foot massager.

After I confronted him, he revealed that he gave the massager to his mom because she liked it. I was floored. After a couple days of discussing it further, Juan said it was because he didn’t have enough money. He already knew I didn’t care about the dollar amount of any gift. I reiterated that he could have made me a card and I would have adored it. Unfortunately, the more he responded to the situation, the more it became unclear as to what really happened.

Later, I would find out the mix up over my Christmas gift was to get me off guard. Juan could never keep a secret from me. He knows I always figure things out. So to keep me off his scent, he conspired the gift mix-up. Hmmm, I’m still not sure if I believe him. LOL

On New Years Eve, Juan was very apologetic for the mix-up. He asked if he could take me out to dinner to make up for all the disappointment. We went to one of my favorite restaurants at that time. As you can imagine it was packed out because of the Holiday. I would later find out, Juan wanted to propose to me at the restaurant but he was too afraid. So, after our lovely dinner, we went back his house.

On our way home, he mentioned to me he had another Christmas gift for me. Another “make-up” gift for what happened on Christmas. When we arrived, a shirt-sized box was under the tree. It was my gift. I opened it up to discover not only a bouquet of roses but a collage of pictures. The array of pictures was a beautiful display of the last four years we had been together.

I was so surprised and appreciative of his thoughtfulness. I noted, he didn’t ever have to spend hundreds of dollars to make me happy. This gift was far more precious to me than any pricey gift he could have bought. That’s when he said from behind me, ” Well, that’s not all. I have one more gift.” I turned around and found him already on one knee. He proceeded to share with me his heart and followed with the question, “Will you marry me?” You would think after four years I would immediately say, “Yes” but I didn’t.

I came from a very traditional home and my parents instilled particular principles in me. When I met Juan, I told him if he wanted to be with me 1) We wouldn’t have sex before marriage, 2) I wanted a long engagement, and 3) He would have to ask my parents for my hand in marriage. So when he popped the question, I immediately asked him if he spoke to my parents first. Thankfully he said, “Yes.” To which I replied, “Then Yes! I will marry you!”

Getting engaged didn’t change the hurt we felt from past mistakes or the challenges we would still need to overcome. Instead, it helped us realize what we really wanted out of life: to live life with each other in it. We both committed to fight to make our relationship work.

Over the next two years, our relationship would grow exponentially. We began to invest in our relationship more than times past and it made a significant difference. We learned more about each other in those two years being engaged  than we did in the previous four years dating. We read books on marriage, attended an engagement seminar, and planned our wedding together. Through it all, we learned what each other’s dreams were, how to communicate effectively with one another, how to work together, and budget together. In fact, we almost called off the wedding once or twice because we didn’t agree with what we were discovering about each other.

Still after failing a compatibility test at the church we were planning to make our vows, the Senior Pastor of the church advising us to break up, and our conflicting ways of thinking; yet we were in love. We were willing to work through our differences and make each other happy. After all, opposites do attract!

Want to read more about our Love Story, click on How We Met, and The Courtship.

A former Educator of 9 years, Angelita is a wife, mother of 3, writer, inspirational speaker and fitness instructor. When Angelita is not on play dates at the park with her little ones or engaging them in their homeschool studies, she’s serving her community. Her utmost desire is to influence others to be happy and healthy by sharing the love of Christ. Angelita also loves to travel internationally with her family, and enjoys planning events inspired by Pinterest.