On Sept. 11th, I started my countdown to Maciella’s arrival. She was already 4 days past due, and although I had not felt anything but Braxton Hicks contractions; I was definitely sensing she was going to be making her appearance soon. However, if at all possible, I really didn’t want my baby girl to be born on a day our nation mourned. I wanted her to be free to celebrate her birth without the pull to memorialize the tragic event of 9/11.

So throughout the day I sent my brother, who lives in Denver, screenshots of my countdown to the 12th. He probably thought I was just being silly but I was feeling Maciella incredibly low. I told my husband, Juan, that I was going to avoid being on my feet as much as possible. I was on bed rest! Thankfully he was in agreement and he was able to help with our preschoolers after work.

By God’s grace, I made it! That evening Juan and I fell asleep around midnight. After an hour of attempting to sleep while because I was so full of anticipation, I got up around 1:30am. I was finally feeling true contractions!

Since my parents live about 35 to 45 minutes away from us, I called them right away to head over to watch Matteo and Milana. I wanted to give them ample time to make the journey to my house before the contractions progressed. We were hearing so many stories from friends of how their third baby delivery progressed rapidly.

By the time I decided to call the hospital it was 3:30am. My parents had already arrived, Juan loaded up the car with our essentials and my contractions were five minutes apart and about 30 seconds long. Since this was my third baby, they encouraged me to head into the hospital. Even though I preferred to labor at home, I figured being at the hospital would help me focus more on the birthing process rather than attending to family.

When I arrived at the hospital, I was only 4 cm dilated and 90% effaced; but the Doctor wanted to admit me. I had tested positive for Group B strep several weeks ago, which meant I would need antibiotics before I could give birth.

Unfortunately, getting antibiotics meant I was strapped for hours. The nurse slowed the drip of the antibiotic to avoid a burning sensation in my veins (it still burned pretty bad) but then it extended each dose to over an hour.

While we were waiting for each dose I decided to labor in the water bath. It was so serene, I kept telling Juan the contractions seemed stalled or gone altogether. Oddly, I only would feel them if I stood up. We decided I should take advantage of the easy labor. After all, it’s precisely what we were praying for. So I rested in the tub while listening to worship music. My husband was massaging my back, while speaking the Word of God. No doubt our room felt very tranquil. Unfortunately we would find out the tub dramatically delayed my progress. I pretty much was just having a “spa session.”

After 3 doses of antibiotics and hours of waiting, I asked to be reexamined. The midwives and doctors were busy with other deliveries; so it took time before someone could assess my progress. To our amazement, by the time a midwife came to examine me I was still at 4cm!!

I was a bit aggravated after hearing the news. It felt like I wasted hours of time. I wished someone would have checked me earlier. Obviously, I had to do something different. Although I was exhausted from lack of sleep, my spa time in the tub was over. I had to jump-start these contractions. My water bag up to this point was still intact but in my previous labors and deliveries my water bag never ruptured naturally. I consulted with a midwife about the pros and cons of breaking my water bag. After our discussion, I decided to keep it intact to protect our baby from any possible strain. However, to help speed things along my midwife suggested I labor inside the shower.

I’m so glad the midwife suggested the shower. Literally in one hour I went from 4 cm to 8 cm. I continued in the shower until I felt the sensation to push. Which at first, the feeling was hard for me to distinguish since my water bag was still intact. The urge to push was not as overpowering as I had felt with my other two babies. My assigned nurse was very nervous about me delivering inside the shower, so as soon as I experienced any inkling to push she urged me to get out.

After confirming I was dilated to 10 cm, they put me on the gurney and told me to push when I felt ready. Funny thing, again I did not feel the contractions or the urge to push while I was on the gurney. I started to think the staff was not going to take me seriously. Was I misreading my body’s cues? I desperately looked to the midwife for some direction. Thankfully again she made another winning suggestion, to deliver standing up. Just days prior I had a friend suggest the very same thing. Although I was very nervous about the idea. I wasn’t sure if I would have the strength. At this point I was ready to have my baby and I was willing to give it a try.

Immediately after standing up I felt a strong urgency to push. I searched for something to hold onto, since the sensation was overpowering. The staff quickly put towels and pillows under me to prepare for Maciella’s arrival.

To be honest it still felt pretty awkward trying to push the baby out with the water bag intact. But the feeling didn’t last long, because after two pushes the water bag broke. A moment later she came.

My husband likes to narrate this scene as if he was watching a football game. The midwife wife “hikes” the baby back to me between my legs with another staff member assisting. All I recollect was how extremely exhausted I was and how my midwife literally pulled me back to rest on her, as she sat on a stool. I’m thinking this woman is showing me some serious love. Noting my current state (those who’ve had a baby vaginally know what I’m referring to) and now I’m sitting on her! She was the best!

Once the umbilical cord turned white, Juan cut the cord all the while I sat on the midwife’s lap. Then they helped me back on the gurney to pass the placenta and spend some bonding time with my little angel. 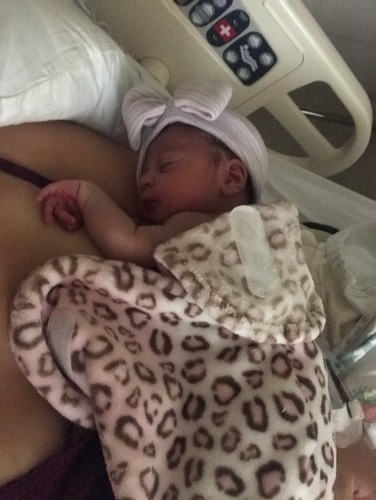 At first, we were not sure if we were going to be able to go home the next day (per typical protocol). Maciella was born just after their afternoon dismissal time and usually doctors like to monitor the babies for 24hrs. Thankfully we were both showing healthy signs and they made an exception. Around 4pm the next day, we began our journey home. Matteo and Milana were ecstatic! 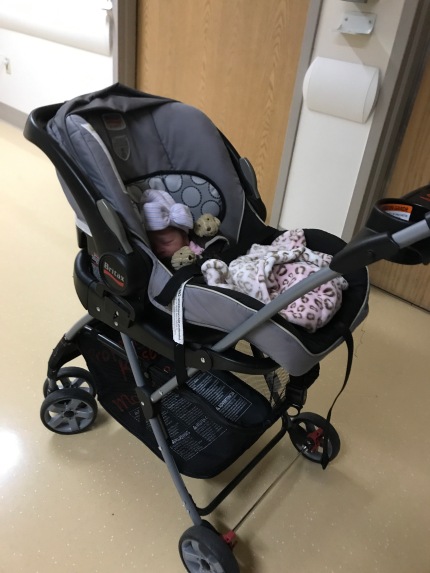 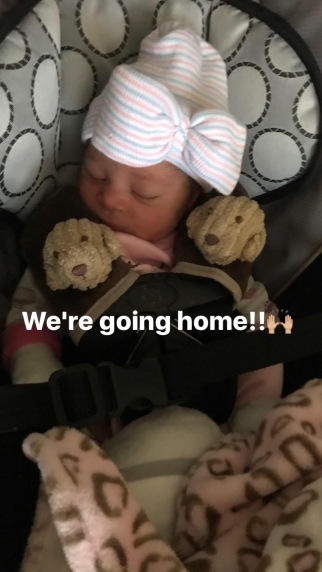 A former Educator of 9 years, Angelita is a wife, mother of 3, writer, inspirational speaker and fitness instructor. When Angelita is not on play dates at the park with her little ones or engaging them in their homeschool studies, she’s serving her community. Her utmost desire is to influence others to be happy and healthy by sharing the love of Christ. Angelita also loves to travel internationally with her family, and enjoys planning events inspired by Pinterest.